“Mares tails and haddock scales, means its time to shorten sails”, says Bill.  We are about 100 miles west of Bermuda and a bit over 600 miles from Newport.  We have been making about 180-190 miles per day.

Bill, among his many other talents, was at one time a professional weather router for ocean racing.  So it is uncanny to watch him parse through the data and the outside-provided forecasts and read the situation.  Yesterday before dark we set the preventer for a gybe to port tack.  Sure enough, at 11:00 pm the wind shifted from SSE to SSW and we gybed.  He now predicts that the wind will increase tonight, into the 30s, still from the SW.  This good news, as it is from the right direction.  The wind strength is not a concern, but Bill’s experience says better to overprepare.  So we have tucked a triple reef into the main and poled out the jib to port. This took a while to get the rig set just right, but when we were done Bill nodded with satisfaction and said “This rig is good to about 60 knots.”  Remember, this is from someone who has sailed in 60 knots of wind, and more, on many occasions.  The wind we expect over the next two days is NOT 60 knots, but rather much like that of the first few days of the Atlantic Crossing – when we were whooping and laughing and surfing down waves.  Don’t worry!

The seas are still flat though the wind is up to 18 knots or so.  We have overshortened sail so we are motorsailing, Tom on watch at the helm. I slept until 8 am so missed the entire fuel transfer operation.We are well-fed and well rested and wholly content.  The sea is vast and there are no ships in sight.  The tracker is charging now.  Time to go make some fresh water. 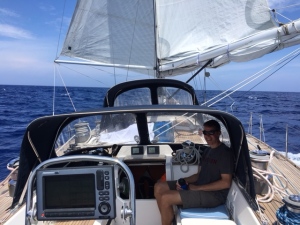